You may have heard rumors of this virus! 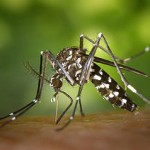 Chikungunya virus is transmitted by the Aedes mosquito which can be found in the northeast U.S.  The virus was originally discovered in Africa and Asia but has now found its way to the Caribbean and Florida.   Over 350,000 people in the Caribbean are infected with this virus.

As of today, there may be 2 locally acquired cases in the continental United States.

Chikungunya reported in the Boston area

Four people in the Boston area have been diagnosed with chikungunya, a viral disease spread to people by way of mosquitoes.

Typically, outbreaks of the disease are restricted to Africa, Asia, Europe and the Indian and Pacific Oceans. But as of late, there has been an increase in reported cases in the Caribbean islands, which some believe may eventually lead to more cases in the U.S.

“With the disease now appearing more frequently in islands neighboring the U.S., it’s quite possible we’ll begin seeing more cases of infected travelers bringing chikungunya home with them,” says Jeffrey Dvorin, MD, PhD, of Boston Children’s Hospital’s Division of Infectious Diseases. “And because the types of mosquitoes that can carry and transfer the disease are present in Massachusetts, there’s an increased risk that it could spread more easily once here, like has happened recently with the West Nile virus. There’s a good chance we’ll be hearing much more about it in the coming years.”

The virus is spread when a mosquito bites an infected patient and then bites a healthy person – passing the virus along to them.  The majority of infected people become symptomatic within 3-7 days.  Symptoms usually include acute onset fever, headache, and debilitating joint pain, which often occurs in the hands and feet.  Other symptoms may include; muscle pain, conjunctivitis, nausea and vomiting, and rash.  Although acute symptoms can resolve in 7-10 days, joint pain can last months to years.

There is no specific vaccine or treatment for this virus but rest, fluids, and NSAIDS (aspirin, Aleve, Ibuprofen) can ease the pain.  The best protection is to:  remain indoors at dawn or dusk when mosquitoes are most active; wear long sleeves and long pants; apply DEET to bare skin http://www.cdc.gov/malaria/toolkit/DEET.pdf ;  empty containers and drain standing water, and keep window screens in good repair.