Dr. Tom Frieden, the director of the Centers for Disease Control, stated that there was a small window of opportunity to stop the Ebola epidemic.  Nearly 40% of the cases have occurred during the past 3 weeks with healthcare facilities filled beyond capacity, a devastating shortage of healthcare workers and medical supplies, and now a shortage of food.  Currently, the World Health Organization believes that the count of 3,069 cases and 1,552 deaths is an under count.

Research continues on the experimental monoclonal antibody, ZMapp, which has been used on a handful of patients.  In a Nature study, 18 monkeys infected with the virus and then given ZMapp survived.

The number of Ebola cases continues to increase.  The World Health Organization http://www.who.int/csr/don/2014_08_20_ebola/en/  states that between August 17th and August 18th there were 221 new cases and 106 deaths.  That brings the total number of cases to 2473 and the deaths to 1350.  Most of the new cases were attributed to lack of appropriate infection prevention when in contact with the bodily fluids of an infected patient.

While the 2 American patients at Emory University seem to be improving, the overall situation in Africa is worsening, prompting the Centers for Disease Control to move its Emergency Operations Center to its highest activation level.  This may be due, in part, to the emergence of several Ebola cases in Lagos, Nigeria, a city of 20 million people.  The World Health Organization updated the Ebola numbers to 1,711 cases with 932 deaths.

The experimental drug, ZMapp, a mixture of 3 antibodies which was given to the American medical workers in Liberia, is now part of a worldwide discussion about the ethics of giving experimental drugs, not approved by any government agencies, to critically ill patients.  To complicate the issue further, if the decision were made to give the limited number of experimental drugs available, which patients in which countries would receive them?  The World Health Organization is convening a group of ethicists to discuss these very issues.

The CDC issued a Level 3 travel warning yesterday for non essential travel to Liberia, Guinea, and Sierra Leone.  The number of cases of Ebola Virus continues to increase and the hospitals are understaffed and overwhelmed with critically ill patients.

Yesterday, the United States Centers for Disease Control and Prevention issued an advisory for US health care workers to consider Ebola virus, and possible isolation, for those patients presenting with viral symptoms and returning from affected countries within the past 21 days.

Ebola virus is an acute illness spread through blood and body fluids with an incubation period from 2-21 days.  Symptoms include headache, muscle pain, intense weakness, nausea, vomiting, impaired kidney and liver function, and in some cases, internal and external bleeding.  The disease so far has infected over 1000 people in West Africa and killed more than 660.  The fruit bat is considered a likely reservoir and infected animals, which are handled or eaten by locals, the way the virus moves from animals to humans.  Humans then contract the disease by coming in contact with bodily fluids such as blood, sweat, urine, breast milk, vomit, and diarrhea of persons who have already contracted the disease.

The disease is spreading quickly in Sierra Leone, Liberia, and Guinea because of multiple issues:  lack of personal protective equipment such as masks, gloves, and gowns;  small numbers of staff and 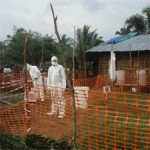 isolation units; and the beliefs of some locals that the medical professionals themselves are spreading the disease.

While several vaccines are being tested, none are on the market at this time and intravenous fluids and fever medications are the only treatment options.