Ticks abound on Cape Cod and can cause a variety of diseases.  The black legged tick (Ixodes scapularis) can carry pathogens that cause the following diseases:   Anaplasmosis, Babesiosis, Borrelia mayonii, Borrelia miyamotoi, Lyme disease, and 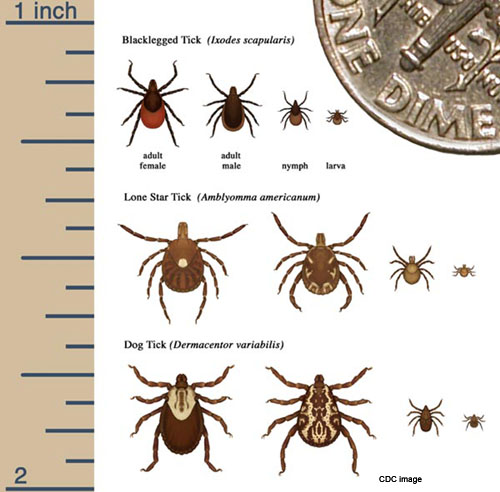 Ehrlichiosis and Stari are transmitted to humans via the Lone star tick.

Powassan disease is relatively rare but is causing concern because of the severity of the disease  and the rapidity of transmission from tick to human…..minutes rather than hours.  Many people who are infected do not become ill, but those who do can develop encephalitis (inflammation of the brain) and meningitis (inflammation of the covering of the brain and spinal cord).  Other symptoms may include headache, fever, vomiting, confusion, weakness, speech difficulties, loss of coordination, and seizures.  The time from infected tick bite to symptoms can be anytime from one week to one month.  Diagnosis is based on symptoms and lab tests on blood and spinal fluid. This is a viral disease and the antibiotics normally used in tick borne illnesses are not as helpful.  Treatment is supportive and may include hospitalization, respiratory support, and intravenous fluids.

Protect yourself from tickbites.  Stay away from brush and high grass.  Use DEET products on skin and permethrin products on shoes and clothes.  Wear long pants tucked into socks.  Do a tick check as soon as you go indoors and put clothing in a hot dryer first, then wash.  Take a shower within two hours of being outdoors.

Remove ticks as soon as possible.

How to remove a tick

Avoid folklore remedies such as “painting” the tick with nail polish or petroleum jelly, or using heat to make the tick detach from the skin. Your goal is to remove the tick as quickly as possible–not waiting for it to detach.

If you develop a rash or fever or above mentioned symptoms within one to 6 weeks after removing a tick, see your doctor. Be sure to tell the doctor about your recent tick bite, when the bite occurred, and where you most likely acquired the tick.